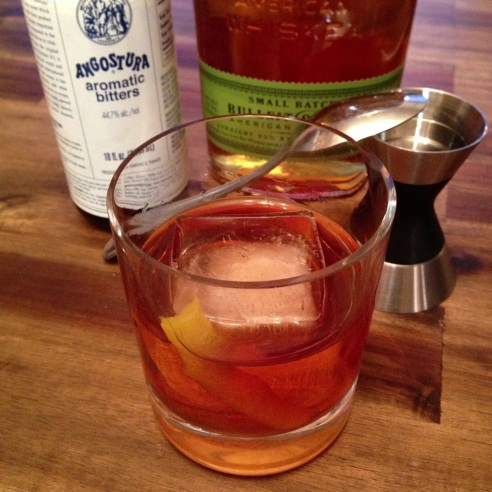 Add the sugar cube to a chilled double Old Fashioned glass and top with bitters and water. Muddle to dissolve the cube. Add a large cube of ice, let sit for a minute or so and then stir gently. Garnish with a lemon twist.

A spirit, sugar, water, bitters and citrus, the Old Fashioned is simple to make yet timeless in taste. The sugar, bitters and lemon accentuate the rye dominant taste of this classic cocktail.

The most classic of cocktails, the Old Fashioned, likely dates back to the early 1800s. The earliest known definition of a cocktail was in an 1806 response from the editor in The Balance and Columbia Repository from Hudson, NY, which defined a cocktail as:

“…a potent concoction of spirits, bitters, water, and sugar. A kind of bittered sling” 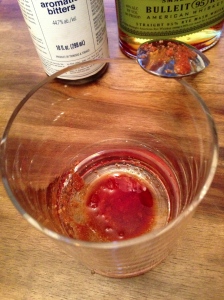 As cocktails and mixology became more popular in the early 1800s, many different types of drinks were created. The name Old Fashioned more likely referred to drinking cocktails in the “old fashioned” way, i.e. sticking to spirits, bitters, water and sugar.

There is actually much debate about when this combination using whiskey was definitively named the Old Fashioned. Variations were added to this original description and were published in various cocktail books throughout the 1800s with the name Old Fashioned. There were also recipes published with the ingredients of the classic Old Fashioned, but with other names, such as “The Whiskey Cocktail” in Jerry Thomas’ 1887 Bar-tenders Guide. 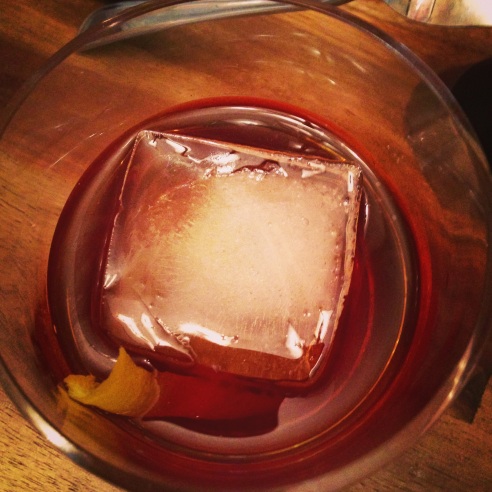 The Pendennis Club in Louisville, Kentucky claims to be the origin of the Old Fashioned. A bartender at the Pendennis Club, Martin Cuneo is said to have invented the cocktail sometime between 1989 and 1895.  The recipe from the Pendennis Club is slightly different than the recipe above, as it includes a cherry, lemon twist and orange slice, which are muddled in simple syrup and Angostura bitters, then bourbon and ice are added. This recipe is similar to and likely the predecessor of the Modern Old Fashioned, which is what most establishments would serve if you were to ask for an Old Fashioned today.

So the debate is what recipe truly qualifies as the Old Fashioned. Is it the original recipe for a cocktail from 1806, with whiskey as displayed above? Or is it one of the many drinks published throughout the 1800s with the name Old Fashioned? Or maybe name of the Whiskey Cocktail was changed to the Old Fashioned?  Perhaps it is the version created at the Pendennis Club in the late 1800s? As in most cocktails, there is a lack of descrete evidence as to the exact source of the drink, with many claiming different origins.

Some would say that essentially every cocktail is a variation or permutation of the Old Fashioned, but we will keep it to drinks of the same vein. Swap the rye for scotch, brandy/cognac or even gin or tequila, most base spirits will do nicely. You could try literally almost any other type or combination of bitters. Swap the sugar cube for maple syrup, agave nectar, or any other sweetener. The possibilities are endless, although some ideas will be featured on The Straight Up.