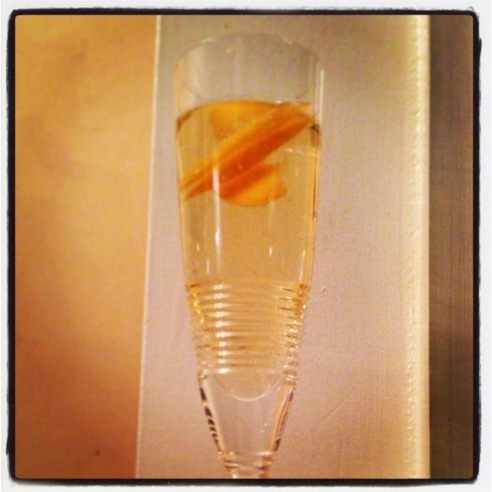 Invented by Guiseppe Cipriani of Harry’s Bar in Venice likely sometime in the 1930s (although some claim it was invented as late as 1948). Cipriani named the drink after Giovanni Bellini a Venetian artist, supposedly because the color of the drink reminded him of a color in one of Bellini’s pantings (either a toga or a sunset, again there are some differences in opinion).

As previously mentioned, I like to drop a dash of peach bitters in mine. Alternatively, you could add almost any other fruit to prosecco or other sparkling wine and have a great drink. Sparkling wine of any kind pairs very well with most fruits.

Actually a predecessor rather than a variation, a close and probably even more popular cocktail among the brunch crowd is the Mimosa, which as alluded to was concocted before the Bellini (early 1900s). For the Mimosa, substitute orange juice for the peach puree and if desired garnish with a cherry. Sometimes the Mimosa is served with ice in the glass.