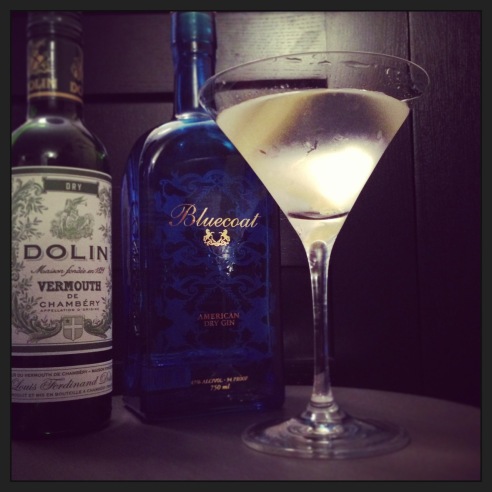 Add all liquids to a mixing glass. Add ice and stir. Serve up in a Martini glass. Garnish with the lemon twist.

Like most cocktails, the Martini has a history that varies based on who’s telling the story. The oldest known story involves the Martini originating as a derivative of the Martinez. As the Martinez was produced around 1850, people claim that somewhere along the line the drink was changed to dry vermouth and ditched the maraschino liquor.

Others claim that the recipe for the Martini was created in the town of Martinez and thus called the Martinez. The name eventually changed to Martini.

San Francisco also claims to have originated the Martini

According to the Oxford-English dictionary, the Martini was created by Martini and Rossi in the later portion of the 1800s.

Some say it is named after the Martini and Henry, a british rifle.

Yet others say the Martini started in New York at the Knickerbocker hotel in 1911.  Created by a bartender named Martini, who first made the drink for John D. Rockefeller.

One of the likely reasons for all the claims, besides groups/people trying to take the credit for the world’s most famous cocktail, is that there were innumerable old recipes for various combinations of gin, vermouth and bitters in varying ratios and combinations with other ingredients.

Base Spirit: The other major and more often seen Martini is the Vodka Martini, substituting vodka for gin. While in many ways similar, the vodka martini lacks the botanicals present in the gin resulting in a less flavorful, but to those less akin to gin, a more palatable taste.

Garnish: Alternatively, many people enjoy their martinis with olives or onions rather than lemon. If you were to use a cocktail onion instead as a garnish the drink would then be called a Gibson.

Adding some olive juice is a Dirty Martini. For the dirty Martini, vodka may be a better choice as much of the botanicals in the gin are lost with the addition of olive juice. Some would say that a martini with anything but a lemon should be vodka as some of the added flavor of the gin is lost. That being said if your gin costs less than your vodka, the decision becomes less clear.

Vermouth: For those who like less dryness, a 50/50 mixture of dry and sweet vermouth for the vermouth component makes the sweeter Perfect Martini. Alternatively you could make a perfect martini with equal parts dry and white sweet vermouth (ex. Dolin Blanc) to keep the color clear but sweeten the drink, making it more accessible to some.

You could also swap the vermouth for Lillet. The Vesper, James Bond’s original Martini, uses Lillet and a 3:1 ratio of gin to vodka for the base spirit, rather than choosing just one. To learn more, check out Vesper.

Bitters: We’ve talked about switching the main spirit, vermouth and garnishes, but you can also vary the bitters. Lemon or peach bitters change the taste with  a still similar flavor. Being a Chartreuse fan, I like to occasionally add a dash of Elixir de Vegetal or alternatively rim the glass with Green Chartreuse. Another idea is to use a small dash of Lavender bitters, works well with gin. More variations and pictures of some of these are in the works.