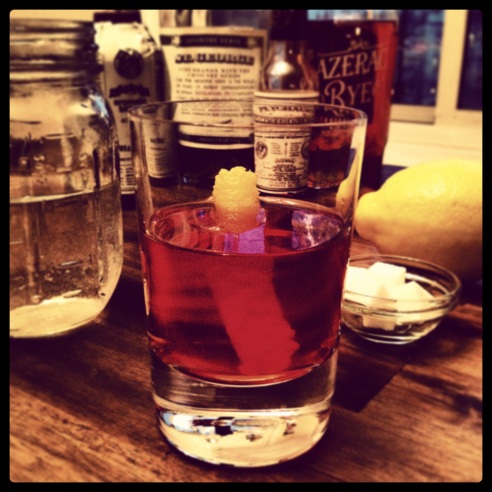 Chill a single Old Fashioned glass with ice. Add a sugar cube to a second single Old Fashioned glass (or a mixing glass) and top with bitters. Let sit for a minute to soak into the sugar cube. Muddle the bitters soaked cube. Add the rye. Add ice from the other glass and stir. Rinse the chilled glass with absinthe and then strain the mixture into the absinthe rinsed glass. Garnish with the lemon twist.

A form of the current Sazerac cocktail originated in New Orleans in the mid 1800s. The Merchants Exchange Coffeehouse (bars were often called coffee houses at this time) owned by Sewell T. Taylor, imported a French brandy called Sazerac-de-Forge et Fils, which was only sold at the Coffeehouse. The bar was later taken over by Aaron Bird, who changed the name to The Sazerac Coffee House. Bird began serving the house cocktail, called the Sazerac Cocktail, which consisted of the imported brandy, sugar, water and bitters produced by Antoine Amedie Peychaud, a local druggist in the French Quarter. The Sazerac cocktail began as a variation of the Old Fashioned, substituting cognac for whiskey.

Interestingly, Thomas Handy’s company, the Sazerac Company began acquiring other cocktail related companies, including Peychaud’s bitters in the 1870s. After Handy’s time, the Sazerac company continued to prosper. In the 1940s, they purchased Herbsaint and in 1992, they purchased the distillery where the rye for the original Sazerac was produced. The name was then changed to it’s current one: The Buffalo Trace Distillery.

Eventually the Sazerac Coffeehouse was taken over by Thomas H. Handy in 1870. Around this time, the phylloxera (grape vine eating insect) plague in France wiped out must of the vineyards, and thus the source of cognac for the house cocktail. Handy made a strategic move and swapped the cognac out for American rye whiskey. This became the preferred way to drink the Sazerac, partly due to necessity, but patrons also enjoyed the spicier and fuller bodied taste of rye. The Sazerac cocktail essentially became an Old Fashioned, using Peychaud’s bitters.

At some point (the exact date is unknown), absinthe was added to the recipe, to rim the glass prior to serving, making the distinct flavor that we enjoy as the Sazerac today. When absinthe was made illegal in 1912, Herbsaint, an anise flavored liquor produced in New Orleans and lacking wormwood was used in the Sazerac. In 2008, the Sazerac was named the official drink of New Orleans.

Interesting folklore surrounding the Sazerac also exists. Some claim the the cocktail was invented by Peychaud himself, who supposedly served it in an egg cup, called a coquetier. According to the story, the word coquetier was “americanized” and became the first use of the word “cocktail.” People in New Orleans and elsewhere still tell this story; however, it is known that the word “cocktail” originated at least as far back as 1806.

While this one is essentially a variation of the Old Fashioned with an absinthe rinsed glass, there are many other things you could do with the Sazerac. Many enjoy it with a dash of the stronger tasting Angostura bitters.

Try it with cognac to get a sense of the original flavor, which is lighter and much sweeter (maybe hold off on the sugar cube). Some use a combination of rye and cognac. You can also substitute about a 1/4 ounce of simple syrup in place of the sugar cube to make the drink faster and easier. Any other anise flavored liquor could do in place of the absinthe in a pinch.

Interestingly, The Old Waldorf-Astoria Bar book, lists the Sazerac with a dash of Italian vermouth instead of sugar and either bourbon or scotch. Worth a try, but I prefer the rye based version.

Alternatively, using chartreuse to rinse the glass also makes for a different take. Green will stay closer to the original but a little sweeter, while Yellow will give a lighter honey flavor. More variations to come.