Add the rye, sweet vermouth, Cherry Heering and Absinthe to a chilled mixing glass. Add ice and stir. Strain into a chilled cocktail glass and garnish with cherries.

Airy light anise and a hint of cherry on the nose. The taste has been likened by many to a cross between a Manhattan and a Sazerac, and I would have to agree. Lighter than you would expect, the classic Manhattan taste is augmented by the anise in the absinthe and the sweetness and cherry of the Cherry Heering. There are accents of bitter in there, but over all this is a bit lighter than both of it’s comparison cocktails. The finish is crisp and clean with a bit of sweet cherry washing up toward the end. Sometime after you swallow, a trail of light anise is left on your tongue to remember it by. 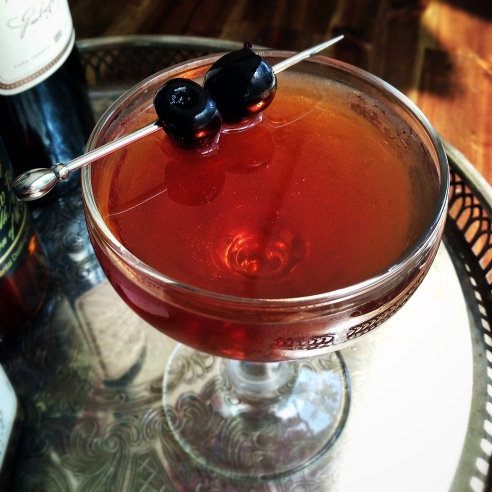 It’s that time again. This months Mixology Monday theme is “Cherries” and is hosted by Andrea at Gin Hound. Here’s the scoop:

“Singapore Gin Sling, Blood and Sand and the Aviation wouldn’t be the same without them. They are brilliant in pies, go great with  pork dishes and may even be a super food able to combat insomnia.
But cherries in cocktails are also horribly abused, few things taste worse than artificial cherry aroma and the description of how most maraschino cherries are made can make you sick to your stomach.
So it’s my pleasure as the host of Mixology Monday number 74 to challenge you to honor the humble cherry.
However you choose to do that, is entirely up to you. You could use Maraschino Liqueur, Cherry Heering, Kirchwasser, Belgian Kriek Beer, cherry wine or any spectacular infusions invented by you in a cocktail. Or make your own maraschino cherries for a spectacular garnish.”

At first going into this one I thought, “oh this is gonna be easy.” Stepping back, some of my favorite cocktails feature cherry flavors/cherries: The Manhattan, Aviation, Martinez, Last Word, etc. I’ve also made a bunch of New Originals with Luxardo Maraschino. That being said I wanted to do something a little different and ended up stumped in a lot of ways. Then reading the above quote I stopped and remembered one of my favorite classics that features cherry flavors: Remember The Maine.

Coming in somewhere between a Sazerac and Manhattan, this is one of my favorite drinks, but I have never made it on my own due to not having Cherry Heering. Lucky for me, this Mixology Monday served as the perfect excuse to buy some.

The interesting thing about Remember the Maine is that despite having such a small amount of Cherry Heering, the cherry flavor ends up fairly dominant in the drink and accented by the other trace ingredient: Absinthe. If you are a fan at all of either the Sazerac or Manhattan, you owe it to yourself to try Remember the Maine.

The first published recipe for Remember the Maine comes from Charles H. Baker’s awesomely titled, A Gentleman’s Companion (1933). This one is named after the U.S.S. Maine which sank off the coast of Cuba in 1898 during an ammunition explosion on board. The cause is still debated, but this event was a prequel to the Spanish-American War and led to the saying: “Remember the Maine, to hell with Spain.” Per Baker’s book:

“REMEMBER the MAINE, a hazy memory of a night in Havana during the unpleasantness of 1933, when each swallow was punctuated with bombs going off on the Prado, or the sound of 3″ shells being fired at the hotel NACIONAL, then haven for certain anti-revolutionary officers”

Interestingly, while recently perusing The Old Waldorf Astoria Bar book (1935), I came upon a cocktail called McKinley’s Delight, which is essentially identical to Remember the Maine. Crockett writes:

“Just why it was McKinley’s delight, I am unable to ascertain. The chances are that President McKinley never found out whether it was or not. In its favor, I may mention that the Bar was a great hangout for the G.O.P.’s of yesteryear, who may have passed their enthusiasm for their candidates across the counter for the barman to translate into terms of liquid intensity.”

More than just interesting history, Remember the Maine is a great classic that surfaced just as prohibition ended. Give it a try and let me know what you think.

Check out the Manhattan and Sazerac for more variations. Another one you might enjoy is the Improved Holland Gin Cocktail.

2 Responses to “Remember the Maine”