America’s great spirit, bourbon was first produced in Kentucky sometime in the late 1700s. Similar to cocktails, the exact story of its origin is unclear. The most common version is that a Baptist minister named Elijah Craig first created this spirit in Bourbon County, Kentucky. According to lore, Craig discovered that burning fish barrels was a fast way to prepare them for whiskey storage, and thus the charred oak barrel was born.

While the charred oak barrel part could be true, the the rest of the story of Elijah Craig is debatable. There are many claims as to who first made bourbon. Some believe that it was the rye distillers who moved to Kentucky during the Whiskey Rebellion and then switched the mash bill from rye to corn as the dominant grain. In all likelyhood there were multiple people making bourbon around this time.

Like all whiskey, bourbon is created from fermented grains, which are distilled and aged. Interestingly, the first bourbons weren’t aged and were clear, also known as white dog. In fact aging was a fortunate accident. When distillers in Kentucky wanted to ship their product to New Orleans, they often had to wait for the warmer months to send boats down the Ohio river to the Mississippi river. In the mean time, the bourbon was stored in charred oak barrels. Between waiting for warmer months and the 3 month journey on the rivers to reach New Orleans, the bourbon aged, taking on its darker color. In fact, the distillers were unaware of this phenomenon. Only once they reached New Orleans were the barrels opened to reveal the whiskeys darker color.

Why is it called Bourbon?

Regardless of who made bourbon first, bourbon was first made in Bourbon county, Kentucky. The distillers use to stamp their barrels with the county of origin before shipping to New Orleans. When the unknowingly aged bourbon reached its destination, the darker spirit was a huge success. People in New Orleans began looking for more of the spirit from Bourbon.

In recent years, bourbon has become one of the most popular whiskeys in America. Part of this resurgence is the renewed interest in classic cocktails. Another likely reason is that bourbon is on the sweeter side and some find it more appealing than other whiskeys such as the acquired taste of peated scotch, especially those new to whiskeys. Additionally, compared to scotch, bourbon is relatively inexpensive.

People often say: all bourbon is whiskey but not all whiskey is bourbon. What does that mean? This was previously touched on in the whiskey introduction, but to quickly recap, bourbon is a subset of whiskey. Just like all trucks are automobiles, but not automobiles are trucks. What makes bourbon different from other whiskeys and how is it made? There are actually some fairly strict legal requirements that must be followed in order for whiskey to be labelled as bourbon. The distilleries in Kentucky, often refer to these as the ABC’s of bourbon:

A – Additives – none other than water.

C – Corn – All bourbons must contain at least 51% corn in the mash bill.

E – Entered into the barrel at no more than 125 proof.

Bourbon does not have to be made in Kentucky, although this is where the vast majority (>90%) of bourbon is produced. Many say that the limestone filtered water of Kentucky which is high in calcium but low in iron gives a particular flavor to bourbon not found elsewhere. 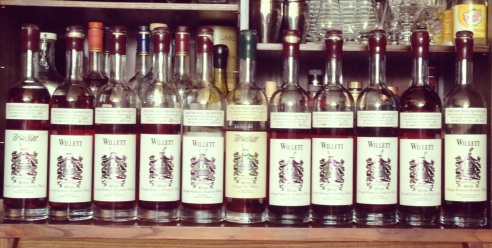 Some distillers use wheat instead of rye. So called wheated bourbons are often smoother and a lightly lighter (all other variables being equal). The wheated bourbons are some of the most popular brands sold and range from the ubiquitous Makers Mark to the scarce and coveted Pappy Van Winkles.

Bourbon is a sweeter whiskey due to the high percentage of corn in the mash bill. In fact many distillers use an even higher percentage of corn to make bourbon. Distillers also vary the ratios of the other grains to change the flavor profile of the final product. The next largest grain in bourbon is typically rye, which much like rye bread has a more robust flavor and spice than the other grains. The addition of rye helps to balance the sweetness brought by the corn. Rounding out the typical mash bill is usually a small amount of barley.

Another contributor to flavor is how long the bourbon is aged as well as where it is stored. While aging, bourbon is placed in large warehouses, called rickhouses. Many have multiple floors to accommodate all the barrels. The temperatures on these floors vary throughout the months and barrels are often placed in certain locations to achieve different flavors. Alternatively, blended bourbons are also rotated through various floors to help keep the flavor profile more consistant.

As stated in the rules above, bourbon must be bottled at at least 80 proof. While most bourbons come in at around 90-95 proof, they can range up to the mid 100s. For example George T. Stagg is around 143 proof. The difference in proofs will translate to different flavor profiles resulting in different strengths and weakness in cocktails and should be considered when making a drink. You don’t want a high proof bourbon completely overpowering lighter ingredients; however, if whiskey is the dominant flavor in the drink, such as a Bourbon Manhattan, then the higher proof bourbons may be of benefit.

This process of blending old yeast with new yeast is also how sourdough bread is made.

Sour Mash – Some bourbons advertise sour mash. What does this mean? Well basically the distillers take a small amount of the fermented mash from the prior batch and throw it in with the new unfermented batch. This lowers the pH of the new mash and results in the new mash having a sour taste (don’t worry, this doesn’t really carry through into the final taste of the bottled bourbon). Essentially, this process makes the new yeast ferment as expected, due to the “familiar” environment and lower pH. Nearly all bourbon distillers make bourbon using this method, as it helps to maintain consistency from batch to batch and thus keeping the flavor profile of your favorites consistent as well.

Some distillers have experimented with using a sweet mash process, which involves using only new yeast, thus starting with a slightly higher pH. Sweet mash was the method used historically until the sour mash process was discovered. Sweet mash whiskey makes for a slightly sweeter but less predictable flavor.

Blended – Most bourbons are blends, i.e. multiple barrels are pooled to create consistent flavor profile. Some blends also contain bourbons of different ages, again with the goal of consistency. Bottle to bottle blends will be more uniform, with every bottle tasting essentially the same.

Small Batch – A subtype of blended bourbons is small batch, meaning that the contents of the bottle sold are a mix of a smaller number of barrels. This number varies from distillery to distiller and is not standardized.

Single Barrel – Single barrel bourbon is just what it sounds – everything in the bottle came from one barrel and thus is the same age, mash, etc. Single barrel bourbons are a more pure form of bourbon than a blend and may have more unique flavors inherent to that particular barrel, distillation, etc. While many prefer single barrels due to the broader more unique flavor profile, the down side is that there will be more variability from bottle to bottle.

Uncut – Uncut means that the bourbon is not diluted with water to a lower proof before bottling. Some folks may be surprised, but not all spirits just happen to be around 90 proof. They often come from the barrel at much higher proofs, but are diluted to what most find to be a more palatable taste. Uncut bourbons are often in the higher range of proofs, for example George T. Stagg, comes in at the 140s. Uncut whiskey will typically cost more, because at full proof the barrel doesn’t go quite as far as it would when diluted to lower proof.

Unfiltered – Bourbon is typically chill filtered when pulled from the barrel. Distillers do this because when chilled or diluted enough to reach typical bottling proofs, unfiltered bourbon will have particles settle out of suspension and take on a cloudy hue. Thus prior to dilution, these soon to be 90 proof bourbons are filtered, so that the product on the shelf looks clear and doesn’t alarm the customer when they chill it or dilute it further.

As you can imagine, by filtering out these particles, some flavor is also removed. Unfiltered bourbon will be more flavorful and is almost always bottled at barrel proof so that a small amount of chilling or dilution will not make it  as cloudy. Some bottles even may have sediment from the barrel at the bottom. Many find this to be most flavorful pour of the bottle.