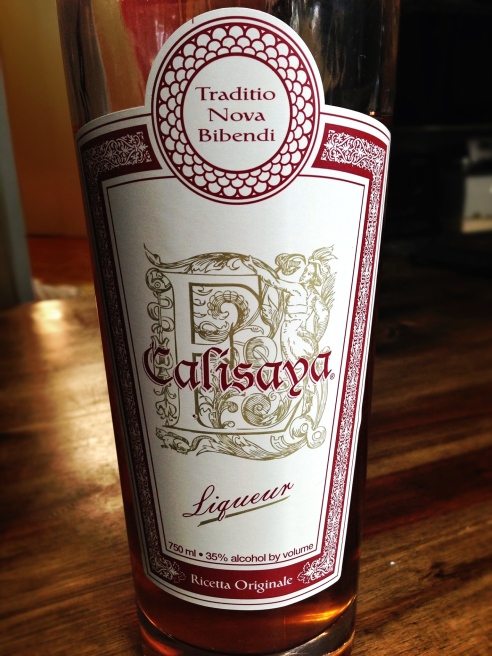 A previously lost ingredient in the US with a history almost 400 years long, Calisaya has been recently revived. Haven’t heard of it? Read on to learn more.

Flipping through pre-prohibition cocktail books, it’s not uncommon to come across a few ingredients that you’ve never heard of before.  At first this was because I just didn’t know that many ingredients, but as I became more educated a few remained mysterious.

Cinchona (a major source of quinine) is what gives tonic its “bitter” flavor.

One of the ingredients that came up in a few recipes was Calisaya. At first, I had no clue what the heck it was; but through the powers of Google, I quickly learned that Calisaya was a bittersweet orange Italian amaro, made from Cinchona. As a bitter/Campari addict, I knew I needed to try some. Unfortunately, I also learned that Calisaya hadn’t been produced for quite some time.

So I forgot about Calisaya and went along my merry way. Until one day I saw it on the shelf at a liquor store. Could it have been revived? Back on Google, I did a little research. Turns out the folks at Elixir, an Oregon company, had indeed revived this long lost ingredient. Obviously, I decided to pick some up and give it a shot.

According to Elixir, they get Cinchona bark from Peru, macerate it with flowers/botanicals from Europe and then add bitter orange flavor from Seville oranges. Neutral spirit is added and the mixture is allowed to blend for a while. Later the flowers and botanicals are removed, sugar, water and more neutral spirit is added. The final product is filtered multiple times and taste tested before bottling.

Quinine and citrus with an effervescent aroma. Hints of spice linger beneath the surface. Bitter and light up front, the citrus starts to come through. Notes of allspice and clove at the finish with a lingering bittersweet spiced root and orange flavor, leaving a light syrupy residue on the tongue to remember it by. Balanced bitter and sweet accents throughout. The mouth feel and sweetness is similar to Gran Classico, but the flavor itself is quite different.

One of the most interesting stories behind a spirit, the history of Calisaya is intimately intwined with the disease Malaria. For centuries in Rome, inhabitants fell ill to this disease during the summer months. The locals thought it had something to do with a summer breeze bringing foul smelling air into the city from the nearby swampy areas (which were extensively mosquito infested). They named the disease “mal’aria,” which meant bad air. The cyclical fevers caused by malaria occur every few days and were known as tertian or quartan fevers.

Many fell ill to and died from Malaria in the summer months, including members of the army, cardinals and even a Pope or two. No one was safe from its effects. Pope Urban was elected in the early 1600s, after the death of the prior Pope Gregory due to Malaria. Urban promoted missions across the world as well as the Santo Spirito pharmacy in Rome.

Once such mission in Puru during the early 1600s came upon an world altering discovery, a Peruvian bark from the “Fever Tree” that had been curing Peruvians of Malaria for years, due to its quinine content. This bark, Cinchona Calisaya, was brought back to Europe and eventually Rome by one of the missionaries and eventually led to the eradication of malaria from Europe.

In order to make the bark more palatable, it was often mixed with alcohol, herbs and honey. The resultant amaro, Cinchona Calisaya, became popular for both medicinal and recreational consumption throughout Europe, even after Malaria was no longer a threat. Like many amari, Calisaya became known as a cure all for many other ailments.

Calisaya also made its way into a number of classic cocktails. The Old Waldorf Astoria Barbook (1935 reprint) lists 10 cocktails featuring the amaro. Somewhere between then and now, Calisaya slid into obscurity. Only recently has it been revived by the folks at Elixir, who are slowly working to reestablish it in the US market. While still limited in availability, Calisaya is definitely worth trying, especially if you are into bittersweet orange flavors, or even just the history behind it. At the time of this writing Calisaya is only available in Oregon, Washington, California and DC (score!), but you can also order it online from various merchants.

Have you tried Calisaya? What did you think of it? Looking for a few cocktails? Check out one of my favorite originals, featuring Rye, Fernet-Branca and Calisaya, called The Study. Another original called Gentian Dream is also delicious. For some of the classic Calisaya cocktails, check out the cocktail section of the Calisaya website by clicking here.

Leave a Reply to Smoke Signal | The Straight Up Cancel reply