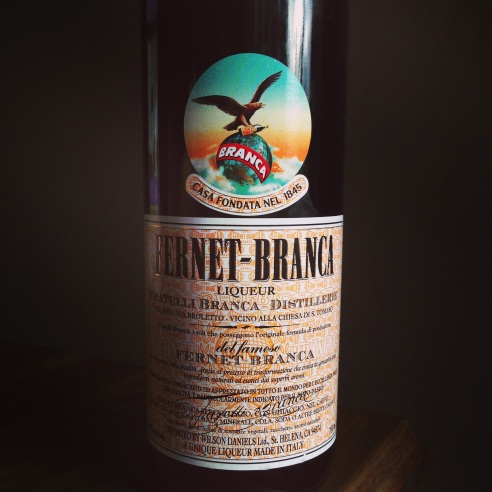 This classic bitter italian amaro has an amazingly complex, one of a kind bitter and some would say “minty” flavor that has been coveted by many and led to a near cult following among its admirers. Shrouded in mysteries and rumors since its inception, Fernet-Branca has a history as complex as its taste.

Fernet-Branca has a closely guarded secret recipe that has been passed down from father to son in the Branca family since its creation. While the exact ingredients and ratios are unknown, some are revealed by the Fratelli Branca company:

“…the 27 herbs it contains come from all five continents: aloe comes from South Africa, rhubarb from China, gentian from France, galingale from India or Sri Lanka, chamomile from Italy or Argentina…

…there are flowers, herbs, roots and plants used for alcoholic brews, extracts and teas…”

Fernet has been rumored to contain opiates in its recipe; interesting, but likely untrue.

The product is aged in oak barrels for at least a year prior to bottling. Dark brown in color, with a subtle yellow iridescence, Fernet-Branca has a look as unique as its taste.

The saffron likely also gives Fernet-Branca its yellowish iridescence and results in it staining clothes if spilled on them.

From what I’ve been able to dig up among the stories and rumors, the “mint” flavor in Fernet-Branca likely comes from the addition of saffron, which in higher concentrations is said to take on a mentholated flavor.  To my knowledge, there is no mint in the recipe. The company makes another product similar to Fernet called, Brancamenta, which as the name suggests does contain mint.

Given the complexity and highly bitter finish, the first taste can be somewhat polarizing, especially for the new drinker, who may not yet have developed a palate for bitter flavors. While a few folks absolutely love Fernet from the start, most are less enthused at first, but after a few experiences, develop a taste for Fernet, and dare I say crave it. In fact, Fernet has a massive worldwide following, extending far beyond its home nation of Italy.

As you can imagine, a combination of such diverse ingredients yields a very complex layered flavor that has different subtleties to different people. An often used word is “medicinal.”  To me, the nose is almost effervescent with flavors of sweet caramel, citrus and mint. The palate has two very distinct layers, a base of sugary citrus and a crescendoing earthy and herbal bitterness with hints of tobacco, chocolate, and caramel culminating in a bitter mentholated finish. If you were to ask someone else they would likely have a totally different perspective. This is what makes tasting so unique, especially in the case of Fernet-Branca.

Fernet-Branca was invented in 1845 by Bernardino Branca in Milan. Another story claims that a woman named Maria Scala invented the amaro and later married into the Branca family, adopting the family’s name for her creation. However, it is more likely that while Scala did marry into the family, it was after Fernets creation by Bernardino. Regardless of who made it, Fernet-Branca was a hit, and in no time, was being distributed throughout Italy.

Fernet typically refers to the original, but it is also used with other Fernet-Branca like spirits, such as Luxardo Fernet or Fernet Cinzano, which represent their respective companies forays into this flavor profile.

You may be wondering were the “Fernet” comes into Fernet-Branca. Shortly after it hit store shelves, a Dr. Fernet Svedese began publishing papers in scientific journals toting the many health benefits of Fernet-Branca. Branca’s creation was the cure for almost any ailment you could think of, from headaches to menstrual pains, to fever, even claiming his family lived into their 100s thanks to Fernet-Branca. Naturally, this built a lot of hype around the spirit. Not to be left behind on this wondrous concoction, other doctors began recommending Fernet to their patients.

Eventually it was discovered that Dr. Fernet, and his healthy old family, were nothing more than a fictitious, marketing ploy by Branca; however, the health claims continued to entrance customers with this bitter amaro. The word Fernet is actually said to have been made up by the Branca family.

The company’s success continued and by 1907, the Brancas began expanding worldwide, including the United States and Argentina. In fact in terms of consumption, Italy, Argentina and the US are the biggest consumers of Fernet-Branca worldwide.

In Argentina, Fernet-Branca has become so celebrated, many consider it an official spirit. Argentina was populated by many Italian immigrants who brought Fernet-Branca with them in the late 1800s. Other boosts to its popularity in Argentina came from further Italian immigration during the world wars as well as from college students in the 1980s, during the Falklands War. This war was between the British and Argentinians over control of the Falklands islands off the coast of Argentina. During this conflict, many students boycotted British whiskeys, instead choosing Fernet because they felt it a national beverage. In contrast to the older  generation, who typically enjoyed their Fernet-Branca neat, this younger generation preferred it with Coca-cola, spurring the intensely popular Fernet and Coke. Currently, Argentina is the only country outside of Italy where Fernet-Branca is produced.

The eagle logo was created by Leopoldo Metlicovitz in 1895. It first appeared in Branca calendars but eventually became the company’s official logo.

In America, Fernet is also hugely popular, particularly in San Francisco. On a recent visit, literally every liquor store I passed had a bottle in clear view of the window. People drank it everywhere. In contrast to Argentina’s Fernet and Coke, San Francisco like to chase shots of Fernet with Ginger Ale.

So what led to its popularity in the states? Chalk this one up to one of the only pluses of Prohibition. Due to its many purported health benefits, Fernet-Branca was one of the few spirits still sold in US pharmacies during prohibition. People grew to love their Fernet and this carried through the repeal of Prohibition, particularly in San Francisco, where North Beach and its many Italian immigrants helped make Fernet-Branca a citywide staple.

The best way to find out what Fernet-Branca means to you is obviously to try some yourself. While you will find it at any reputable watering hole, I would recommend digging just a little deeper into those pockets and going for a bottle. Fernet-Branca’s reasonable price is hardly more than a couple pours. This way, if you are not in love at first sip, you will have more opportunities to get to know Fernet-Branca with a bottle, allowing you to really get a better sense of its complex bitter flavor. Besides that, Fernet is also an essential ingredient in some great classic cocktails.

Fernet-Branca, is an essential amaro, whether taken straight or in cocktails, with Coke, like Argentina, or chased with Ginger Ale, as they do in San Francisco. It simply doesn’t matter, any way you try it, you are sure to enjoy Fernet-Branca’s one of a kind flavor. If not, you can always send me the bottle.