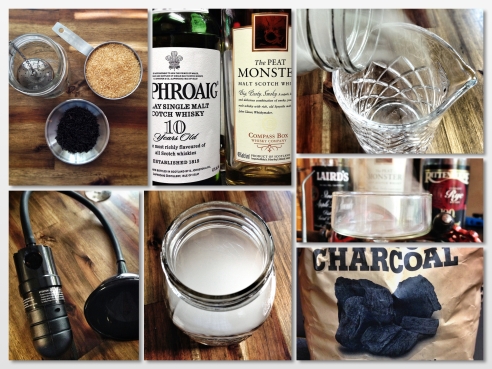 In case you couldn’t tell, I love a good smokey cocktail. Something about the flavor just does it for me, whether on a cool day, to warm up with some whisley, or even in the middle of summer, when it’s blazing hot outside. I just can’t get seem to get enough smoke in my life (that being said I don’t actually smoke, other than the occasional cigar).

This smoke laced Mixology Monday has also inspired me to branch out and experiment with even more ways to add one of my favorite flavors to a drink. It also seemed like a good time to put some of these ideas together in hopes of inspiring others to smoke up their drinks. The following is a few of my favorite ways to do this. And don’t worry, it’s much easier than you might think.

My longterm favorite and perhaps the easiest way to add smoke to a drink is to rinse the glass in peated Scotch, such as Compass Box’s The Peat Monster, or the ever popular Laphroaig. This will add some smoke flavor to your drink and it requires minimal effort or preparation, other than having a bottle of peaty Scotch on hand. No need to change the drink recipe at all or mess with ratios, just pour a little smokey stuff in your cocktail glass, swirl it around and then pour your drink in. For a few examples, check out my recipe for Smoke Signal, Boulevardier or Osakan Summer. This method results in a lightly smoked aroma but doesn’t do anything to drastic.

Along the same lines, you could also just sub out some or all of the original ingredient for a “smokier” one such as peated Scotch or smokey Mezcal. Just be careful with things like Laphroaig, a little can go a long way. It’s always better to start small and then adjust to taste. Try a Scotch Boulevardier or a Mezcal Negroni. Another favorite, a Mezcal Last Word, is a great example of a smokey citrus drink, easily made by using Mezcal instead of Gin. 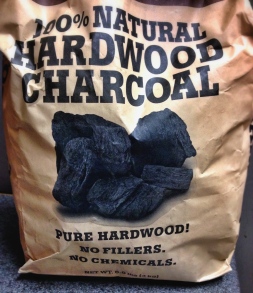 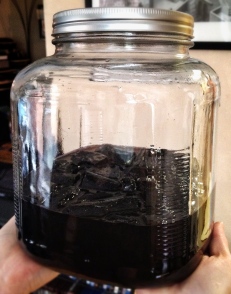 The other way I’ve “smoked” cocktails in the past is to age them in charcoal. I know what you are thinking:

Isn’t that stuff filled with a bunch of nonsense that will give me cancer/poison me?

Well if you use the run of the mill average charcoal, then yes probably. However, I recommend avoiding certain death by using an all natural hardwood charcoal, with no added ingredients. This is basically burnt wood, similar to what would be inside that barrel of bourbon you enjoy so much.

For an example of this technique, check out Smoke in the Woods, a charcoal aged Boulevardier.

Smoke in the Woods

Tip: Charcoal aged Campari is something you need to try.

The downside of this method is that it takes time. However, depending on how long you age it, this mix works great as a cocktail (at a younger age) or as a “bitters” or tincture if you age it longer (if using as a tincture pick some higher proof whiskey, it’ll be more potent). You don’t have to age the whole cocktail either. Try charcoal aging just the base spirit or one of the ingredients. Just be careful with aging vermouth by itself as it does spoil within a month or so of opening (aging it with a spirit will preserve it).

Another popular method of adding smoke to your cocktail is to employ Lapsang Souchong tea. This is a smoked black tea that has a heavy peated/smoke flavor. There are a number of things you could do with this tea. One option would be to infuse a spirit with it. Basically, just mix the tea with some bourbon, rye, rum, or what ever sounds good and let it sit in a cool dark place for a couple weeks. Just be sure to taste it every few days along the way, until it reaches your desired level of flavor.

Other folks have made a simple syrup with the Lapsang Souchong tea. This is also very easy and takes just a few minutes to create. Sugar works to make a SIMPLE SYRUP, or get creative and try a Lapsang Souchong DEMERARA SYRUP, which has an awesome brown sugary/maple syrupy like flavor. Check out SMOKE SIGNAL for an example of an OLD FASHIONED made with this syrup.

This method is also very versatile, try it with almost any sugar. You can use it just like you would simple syrup and it will go well in almost any cocktail that lends itself to smoke.

It might sound obvious, but another way to add smoke to a cocktail is to just smoke the cocktail itself. I have one of those cool smoking guns, which will smoke up a cocktail (and my apartment) really fast.

How to do it (without a fancy smoking gun):

Not only does this make an awesome display of smoke, but it works really well and really fast. Smoke Signalis again a great example of this technique. Just be mindful with this method, as it can be very easy to “over” smoke your booze, especially if you are using The Smoking Gun.

…Or Just Smoke the Glass:

Fnally, taking a similar approach to smoking booze itself, you could also just smoke the glass for your cocktail. Follow the same steps as smoking the cocktail, but pump the smoke into the glass you plan to serve it in and then cover it. Let the smoke marinate for a few minutes while you prepare the drink, then uncover the glass as you pour the drink. The smoke leaving the glass also looks pretty cool. For an example of this method check out Apple and Snake. 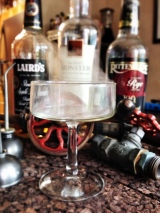 Elana over at Stir and Strain also has an excellent example of this (and gorgeous pictures) using smoked rosemary with her cocktail The Royal Affliction.

You don’t have to stop with just wood chips. The same technique could be used to smoke other things, like tea, cinnamon or herbs. While not everything tastes great smoked (believe me I’ve tried some odd stuff), it’s fun to play around a bit and I’ve discovered some good combinations.

Obviously these techniques will incorporate a little smokey goodness to your cocktail; however, they will do it in very different ways. You may want to start with adding a little bit of smoke, either through rinsing the glass or incorporating some smokey spirits into your drinks. That being said, there may be times you may want a little more “oomph” than simply rinsing the glass and choose to go for the hearty mature flavor of a charcoal aged or the in your face taste of a smoked cocktail.  Other times, waiting around to age or infuse your drink may not be worth it if you are trying to make something tonight.

Think of these all as unique methods in your arsenal that should be employed as you see fit, alone or in combination, to add smoke to whatever you are creating. You probably noticed already (after all the shameless plugs), but check out Smoke Signal for a great way to add smoke flavor in multiple forms to the same drink.

I’m looking forward to the round up from this Mixology Monday. I’ll be sure to include any new uses of smoke that surface.

Did I miss any good ways to smoke up a drink? Drop me a line and let me know.

7 Responses to “The Smoked Cocktail”