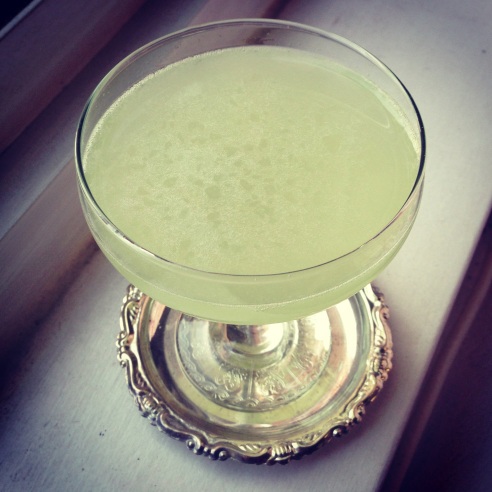 Add the gin, Green Chartreuse, Maraschino and Lime Juice to a shaker glass. Add ice and shake vigorousely until the outside of the shaker begins to frost. Strain into a chilled cocktail glass.

An unlikely, yet perfect balance of four ingredients, the Last Word is one of my absolute favorite cocktails. The beauty is also in its simplicity, equal parts all ingredients and no garnish.

If made right (i.e. MEASURE IT!), each ingredient can be picked out individually from the mix, yet somehow they all also blend harmoniously into something much greater than the sum of its parts. Citrus, botanicals, anise and sweet cherry, the combination sounds a bit weird, yet once you try one, I think you’ll be hooked.

Many liken the Last Word to a gin sour for obvious reasons (Gin+Lime+sweet); however, the combination of sweet and herbal components, maraschino and Chartreuse, bring in so much more than simple syrup or other sweetener could ever bring. To me, much like the Aviation and my Lily’s Pad, there is also something special about maraschino in a sour that changes the whole dynamic and makes for a much more complex and enjoyable cocktail.

Last Word has a story of multiple appearances, followed by lengthy lapses in time, where the cocktail essentially vanished, only to resurface again decades later. Let’s start at the beginning. . .

Folks have posited that perhaps the Last Word got its name because it was the last cocktail created at the Athletic club prior to prohibition.

The Last Word originated at the Detroit Athletic Club, sometime around 1920, where it was created by a Vaudeville artist by the name of Frank Fogarty.  Unfortunately, as many know, Prohibition also began in 1920. So sometime around Prohibition, this cocktail was both created, then lost to the world, scrawled somewhere only to be rediscovered 30 years later.

In 1951, the Last Word resurfaced again, this time in Ted Saucier’s Bottoms Up (1951). In fact, the info about the drinks origins at the Detroit Athletic Club comes from Saucier’s book. The often quoted line is as follows:

“Courtesy Detroit Athletic Club, Detroit.  ‘This cocktail was introduced around here about thirty years ago by Frank Fogarty, who was very well known in vaudelville.  He was called the ‘Dublin Minstrel,’ and was a very fine monologue artist.”

The question no one has been able to answer is under what circumstance did Saucier obtain this recipe and its history?. Did he know someone at the Club? Or maybe Fogarty himself? Or did he find some old bar book discarded at a book seller, yard sale, etc? Regardless, Saucier gets kudos for being the first person to publish this recipe. Again though, for whatever reason, Last Word didn’t catch on, Saucier’s book fell into obscurity and the Last Word was again lost in time for decades, this time for about 50 years!

Fast forward to Seattle, 2004. Murray Stenson of the Zig Zag Cafe, is looking for a new cocktail for the menu. He finds Last Word in Saucier’s Bottoms Up and begins to serve it. Slowly but surely the drink picks up popularity, served at first only at the Zig Zag Cafe, but eventually Last Word begins to spread to other bars across the nation. Now in 2013, it’s safe to say the Last Word is probably one of the more popular non mainstream classics out there (i.e. outside of Manhattans, Sazeracs, etc).

It’s hard to believe that without a few strokes of luck through being published and later rediscovered, that the Last Word might have remained lost in time and I wouldn’t have had the chance to try one of my favorite cocktails.

This story of loss and rediscovery also makes you stop and think, “how well did I look through that old cocktail book?” While at this point, many of the greatest classics have likely already been found in the older books, I am sure there are plenty more out there, waiting for someone adventurous enough to give them a chance.

A lot of great variations of the Last Word exist. Additionally, the cocktail lends itself well to substitutions. Check out Final Ward and Fernetaboutit, or read about both as well as some other ideas in Variations – Last Word.