Add the genever, maraschino (or curaçao), absinthe, simple syrup and Angostura bitters to a chilled mixing glass. Add ice and stir until well chilled. Strain into a chilled coupe. Garnish with the lemon twist.

There are a few ways to make this one. The version pictured above and described below features Cointreau.

Citrus malt and anise on the nose.  The sugar in the simple syrup and Cointreau really brings out the flavor in the genever and absinthe, which dominate the mid palate. That said there are layers of orange peel, burnt sugar and of course malt layered throughout. The finish is all anise and malt. Light and refreshing with great complexity. While playing gently in the background, you couldn’t do this without Angostura bitters, which also gives the drink its beautiful color. 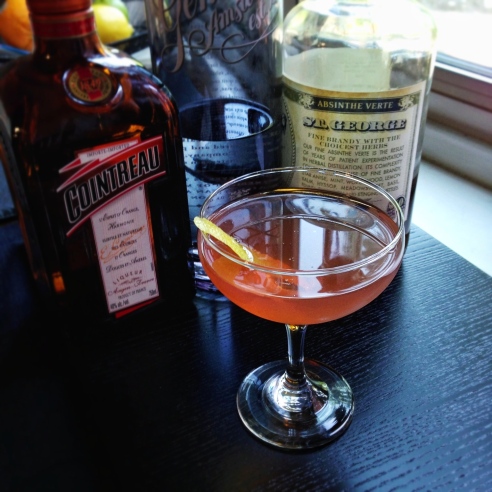 The Improved Holland Gin Cocktail dates back to the 1800s. Some have surmised that the drink was created in the early 1800s as it also follows the original definition of a cocktail: a blend of spirit, sugar, water, bitters. Minus the modifier (curaçao or maraschino) the Improved Holland Gin Cocktail becomes an Old Fashioned with Genever. The modifier gives it the “improved” title.

All that aside, the oldest printed version I’ve seen is in Jerry Thomas’ Bar-tenders Guide from 1876. In that book it is simply listed as the “Improved Gin Cocktail.” This recipe is as follows:

The genever version must have been more popular, giving rise to its current name, the Improved Holland Gin Cocktail.

There are multiple variations of this one. If you look up other versions you are bound to see very common differences in the recipes. Some folks/books use curaçao (not the blue stuff) instead of maraschino. While I love it with maraschino, for the version listed above I used Cointreau. Although technically a triple sec, Cointreau works well in the drink and is closer to maraschino than Curacao.

Wondering what the heck the difference is between curaçao and Triple Sec?

Curacao originates from the island of Curacao, a Dutch colony in the Caribbean. Triple Sec is French.

Don’t worry, I was too. These two liqueurs are similar in that they both contain orange flavor married with a base spirit. In the case of CURAÇAO that base spirit is brandy and thus the resulting liqueur is typically darker (think Gran Marnier, which while French is a Curacao style liqueur). For Triple Sec, a neutral spirit is used as the base and are typically clear.

For the version above, I also played with the ratios a little bit. Gum syrup is a rich simple syrup (2:1 sugar to water with an emulsifier, called gum arabic, added). To keep things simple (no pun intended), I used regular simple syrup.

The Improved Holland Gin Cocktail, much like the Old Fashioned (on which it is loosely based), lends itself very well to variations. Try experimenting between Genever and Old Tom gin as well as between maraschino and curaçao (or even triple sec).

Stay tuned for an upcoming new creation with Lavender, Tarragon and Green Chartreuse.

Leave a Reply to The Fixer | The Straight Up Cancel reply