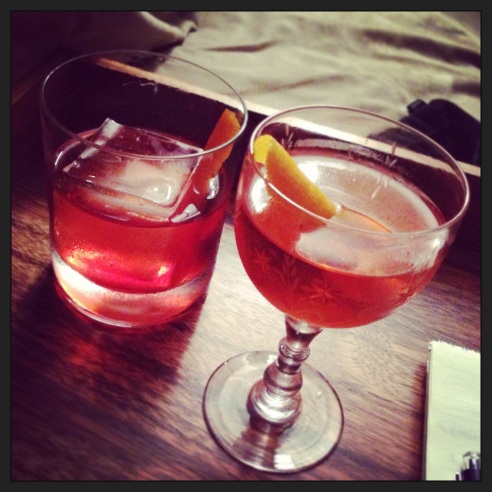 Variations are common – one example, the Negroni and Summer Negroni.

An unfortunate truth: Many of the things you think you created often already exist. This fact holds true to some extent in all of life, but it is especially true in the world of mixology.

We’ve all been there, “If only I had been the first to come up with this idea, I would be soooo rich.” The good thing is that I can’t imagine any significant loss of financial opportunity coming from creating a cocktail that is similar to one that already exists.

What am I getting at? Well recently, I came across this very problem while researching for a recent post: A cocktail I created is incredibly similar to one that was created prior to me. While somewhat bummed, this is not completely unexpected. These things happen and chances are being new to this game, things you think are a good idea, were probably a good idea to someone that came before you. That being said, this scenario makes for a great point of discussion:

What is it that makes a cocktail unique and allows it to stand on its own amongst the sea of other cocktails?

Before we dive deeper into this topic, lets set the stage with my example. . .

A while back I created a cocktail, Palermo, that eventually made its way to The Straight Up. In case you missed it, here is a brief recap: 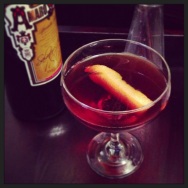 Going into this one, I wanted to make a Toronto variant using Averna. After a few permutations, I came up with Palermo, which in the end resembled something sort of in between a traditional Manhattan and the Toronto. Well, as some folks may know, there is another cocktail, the “Black Manhattan,” which is nearly identical and was created prior to mine.

As alluded to in its title, the idea behind the Black Manhattan is to make a Manhattan with Averna in place of vermouth, but still use Angostura and a cherry. The difference (outside of the bitters and garnish) is in the mindset, but serves as a way to demonstrate how different ideas and twists can come about for different reasons, only to end up being close to the same thing.

Unfortunately, this happens all too often; you believe you are the first to create something, only to find out something similar is already around. Digging a little deeper, there are two important things that come from this discovery:

So what does make for a unique cocktail?

Is it that it is the only cocktail using a certain combination of ingredients? Can it be the same ingredients but with different ratios? Or what if everything is the same, but you swap the bitters or the garnish? Or maybe you just rinse a glass with another spirit, but keep everything else the same. How much different does a cocktail need to be in order to realistically be considered able to stand on its own?

Unfortunately, there is not a specific answer to this question. In fact, I think most folks would agree that what makes a cocktail unique is actually quite difficult to define, but that you know it when you taste it – “Ah, yes, this is something different.” There is something about flavor, appearance, and/or presentation that sets it apart from other cocktails. That being said it may have notes or similarities to something else, but in the end it stands alone as its own thing.

No one would ever argue that a Manhattan and an Old Fashioned are completely different cocktails. But what about a Sazerac and an Old Fashioned? Essentially, a Sazerac is an Old Fashioned placed in an absinthe rinsed glass. While quite similar in preparation, the final product tastes significantly different, even though the only difference is a simple modification in the preparation. Again, I think that no one would argue that these are also two totally different cocktails, despite being alike in almost every way. In contrast, I typically rim my cocktail glass with Peat Monster Scotch when making a Boulevardier, to add a smoked flavor to the cocktail; however, even though this significantly changes the taste, I still consider it a Boulevardier.

How about in the case of the Palermo versus the Black Manhattan? In this case things are somewhat less clear cut. This comparison definitely falls along the lines of the Sazerac/Old Fashioned spectrum. Putting things into the context of the one that was invented first, my cocktail is “simply a variation” in the bitters and garnish, even though my mindset in its creation was completely different and I was unaware of the Black Manhattan at the time I created Palermo.

That being said, the two cocktails do taste reasonably different, although not quite on the same scale as the difference in taste between an Old Fashioned and a Sazerac (likely due to the very strong flavor added by absinthe in the Sazerac, even if it is just a rinse). A purist would say that technically Palermo is a variation of the Black Manhattan. As a further illustration, I sometimes use different bitters or an orange twist in a Manhattan, but typically still think of it as a Manhattan.

“historic” references, such as classic cocktail books, for example The Old Waldorf Astoria Bar book, list numerous recipes that appear quite similar in ingredients, but go by completely different names. That being said, I have no doubt that they would each taste slightly different. Maybe they were each created at similar times and named by their creators.

For a quick example, we will use variations of classic ingredients for a Martini: gin, dry vermouth and orange bitters.

These 3 examples are only of drinks that start with the letters “A” and “B” in the book and contain all three ingredients. There were additional recipes in the A and B sections that used sweet instead of dry vermouth as well as those that used other types of bitters. All of these recipes are very similar in content; however, the slight modifications make for differences in the taste of the final product.

This leads into the second and more important discussion topic beyond the semantics of naming cocktails/variations. . .

This fact holds true in both classic and modern cocktails. Take two classics, the Boulevardier and the Old Pal:

The main difference between these two recipes is the type of vermouth used and secondarily the type of whiskey and twist. Stepping back further, many would say that these are variations of a Manhattan. Now take that same idea and swap the vermouth for St. Germain and use a more “modern” ratio, 2 parts whiskey to 1 part each modifier. This is the basis for the RC St.G: 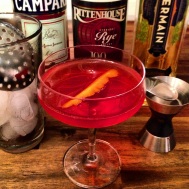 Take this a few steps further, swap the St. Germain for Domaine de Canton, then modify the recipe to fit the new ingredient by using the lighter Aperol in place of the Campari, and you get another creation Le Louvre: 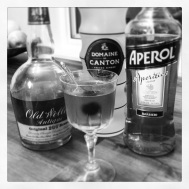 Suddenly, it becomes clear that many classic and modern cocktails are simply variations of a variation of a variation, even though the final products taste completely different.

A great way to experiment with variations is to pick a cocktail you enjoy and plan to have more than one of (or to try even more, make half size versions, and/or share them). Make the first cocktail the way you would normally do it. Take notes, either physical or mental, and then try it with a different ratio of the same ingredients, or throw in an additional modifier. You will soon find that things you might have considered inconsequential can completely change the taste. This is also why measuring your mixes is more important than you may initially think, as slight differences in proportions can also have a big impact.

In the end, there seems to be a very gray area when deciding what constitutes a cocktail worthy of a specific name or whether it is best thought of as a slight variation. Practically speaking, for drinks that taste totally different, there is no discussion needed. As far as drinks that are similar in ingredients, if you were to look at restaurants around the world, there will be innumerable cocktails that have very similar ingredients but that go by different names, probably with a good number that are completely identical. People like to name their drinks, plus on a menu it sounds better to say a specific name rather than spelling out the subtle differences.

For another example, check out ABCDEF, which is essentially identical to a cocktail of a different name served at a bar in DC. Not sure which one was created first.

Another aspect to consider is whether or not the creator is aware of the other cocktail. In the case of Palermo vs Black Manhattan, as far as I knew, I did create a new cocktail, even though I was unaware (ignorant) of the existance of another similar cocktail. That being said, what if I knew nothing of other cocktail recipes and had created something that essentially was an Old Pal, not knowing that this classic already existed. In that case, I think no one would argue that I would have no right to name the cocktail and call it my own. Where things are more nebulous is when both cocktails are newer creations, especially when neither are ubiquitously known. As long as you aren’t completely ripping off another cocktail, it would be impossible to know every other cocktail that has ever been created, in order to decide if your new idea is completely unique. All this being said, in the end:

There is no true consensus on at what point a cocktail should be considered  a new creation versus a slight variation.

On one hand, there are many great combinations of ingredients that have already been done. For this very reason, many of the cocktails featured on The Straight Up are classics. These have stood the test of time for good reason. On the other hand, the possible combinations are truly endless, allowing for great ideas and creativity, even though if by a different road, they do end up being similar to something that already exists.

For the purposes of The Straight Up, variations will often be included under the variations section of each recipe, while some of the more interesting ones will be featured as separate recipes (see: Albuquerque Old Fashioned), in order to hightlight their distinctive flavor. That being said, I will not to be posting numerous recipes that are almost identical, just for the sake of filling the site with content.

2 Responses to “Variations of Variations”